Some of Westridge’s parent ambassadors with whom prospective families can connect. 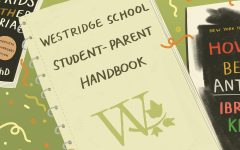 DEI initiatives and efforts to increase student diversity are not new to Westridge’s admission process. “There are some strategies we have expanded upon and some newer initiatives that are underway to spread the word about Westridge to families that may not hear about us through traditional marketing and outreach efforts,” explained Margaret Shoemaker, Director of Admission.

This outreach includes attending school fairs for prospective families, collaborating with access organizations that identify and support underrepresented students in the enrollment process, and connecting student and parent admission ambassadors with prospective families.

Financial aid also plays a role in increasing student representation, racially, culturally, and socioeconomically. As of November 2020, Westridge’s financial aid budget is $2.7 million, and 23% of the student body receives aid. Of those financial aid recipients, approximately 40% identify, full or in part, as Black/African American and/or Latinx.

Underrepresented applicants may choose to attend Westridge if they see greater diversity already existent at Westridge. But this can present a “chicken and egg” dilemma, explained Sarah Jallo, Senior Director for Enrollment Management & Student Outcomes. “It helps to have critical mass to attract people, but we have to get people in here to create the critical mass.”

The tuition cost of any non-public educational institution, even with financial aid offerings, can cause applicants to decide against applying and eventually attending. “People assume that [admissions] only admit a very small number of diverse candidates. We actually have a very high admit rate of diverse candidates. The yield, the amount of the students who actually enroll, is where we have a drop,” said Ms. Shoemaker. “The lower yield comes because [applicants] look at all the different options, and they figure out what makes the most sense for their family—and affordability is certainly included in that decision. Sometimes Westridge makes it through that decision-making process, and sometimes Westridge doesn’t.”

The National Association of Independent Schools (NAIS), of which Westridge is a member, recommends that schools only offer need-based aid, meaning a family must demonstrate significant need to receive aid. In the NAIS-recommended Guidelines for Merit Awards/Tuition Remission, it states, “NAIS reaffirms its belief that the purpose of a financial aid program is to provide monetary assistance to those students who would not be able to attend an independent school without such assistance.”

However, merit aid, or aid that isn’t solely need-based, can be useful to attract families. “I would like us to have something extra than what we have,” said Ms. Shoemaker. “I’m not sure merit is the right word for what I’m envisioning—I’d like to have some lever to pull to say, ‘Wow, our student population is underrepresented in these areas, and we can target these areas for student enrollment by doing x, y, and z. The model that I like to reference in these conversations is the Posse Foundation model—a model used to support the enrollment of underrepresented students in universities across the US.”

The Posse Foundation identifies a small group of high-achieving, underrepresented students—known as a Posse—and then partners with colleges and universities to enroll these students at no cost. According to the Posse website, this group of students then works with their respective institution and acts as leaders to “build more interactive campus environments so that they can be more welcoming for people from all backgrounds.” Ms. Shoemaker continued, “If we don’t do something different, we are going to be right where we are a year from now and a year later and a year later because I feel like we’ve maxed out the admission tools that we have as a school—in terms of outreach, in terms of making connections, speaking families’ native languages, going places, trying to bridge the gap.”

“In admission what our struggle is—we may not be exactly in line with the wealth distribution of Los Angeles—but we do want to be more socioeconomically diverse than we currently are,” said Ms. Jallo. “Particularly our middle-class families for whom they can maybe just make it work or they’re just under.”

With the amount of money allocated to financial aid, the Admission Office can greatly help certain families. However, few options are available for families in the middle who technically don’t qualify for aid, but have limited liquid assets to draw upon to pay for an independent school.

“Those are the families where we get stuck,” said Ms. Shoemaker. “We get stuck with the middle and how to finance the middle.”

“It’s always this balance of need, and what does need mean,” said Ms. Jallo. “Westridge to some degree has to define that. What are we willing to make accommodations for and what are we not.”

Westridge’s fundraising has grown over the past three years, and part of this is because “Alumnae have really taken charge,” explained Diana Bernal O’Leary, Director of Advancement.

A group of alumnae from the class of 1969 launched the  Forever Fund, an initiative to raise money specifically for financial aid. As of mid-April, they reached $500,000, halfway to their goal of $1 million. As an endowment, the money from the fund is invested, and the school uses earnings from the investment.

To further increase fundraising for financial aid, Ms. O’Leary added, “It’s a lot of prioritizing. That and making sure that people are aware of the impact of financial aid.”

Increasing Westridge’s endowment is also important to subsidizing more of the financial aid budget. Instead of getting an individual donor to support one program or initiative, Ms. Jallo explained, “The idea is to get away from that so that every year your endowment draw could pay for all these extra things while not relying on a single donor or passing the cost along to parents.”