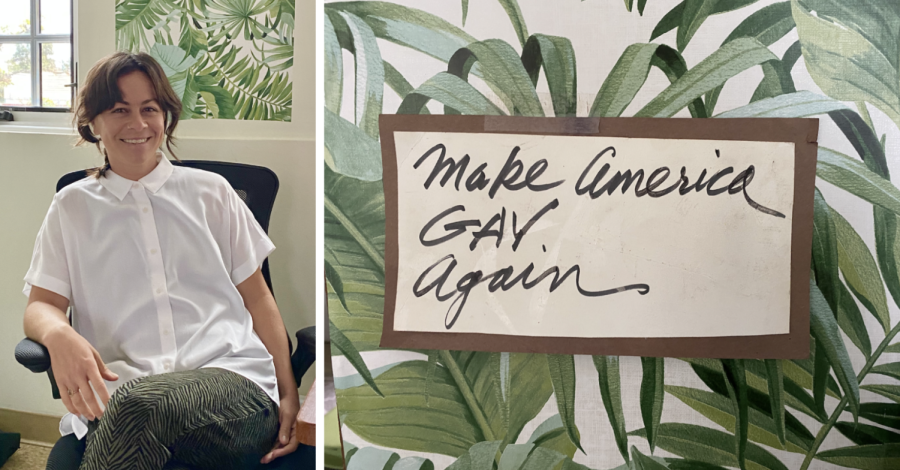 I think it’s really interesting that we use our job to explain what we are. It’s just what I do. It’s not necessarily who I am.”

The first thing Emily Mukai tells me is that she was mistaken for a freshman. She was in the Commons, trying to figure out what Fiesta Friday is—a good question, by all standards—when a senior asked if she was a freshman. Punctuated by laughter, she said: “I am flattered that I still can pass as a 14-year-old.”

Perched at her desk on an office chair that screams Professional AdultTM, in a job with a vague but responsible title, Coach Mukai bears little resemblance to a high school freshman. However, when I think of Coach Mukai’s Westridge-uniform adjacent (read: khaki shorts and Docs) look, being mistaken for a student doesn’t seem like that much of a stretch. And as a lacrosse player accustomed to seeing Coach Mukai in a beanie with a ball bag slung around her shoulder, I’m not used to seeing her on campus before 3:30 pm in anything but Nike clothing. It’s a refreshing change.

Coach Mukai has coached the lacrosse team since 2019, but she joined Westridge full-time this year as the new Human Development Coordinator. (Despite having known her as Coach Emily on lacrosse, I refer to her here as Coach Mukai because that is how she is known within her classes.) Melanie M. ’23, a goalie for the lacrosse team, summed up her thoughts on Coach Mukai’s new role: “I love how [Mukai] brings the lacrosse energy to everyday life.” As Coach Mukai and I talked about the switch from athletics to full-time faculty, it became clear that the transition has been mostly positive. “I think [my favorite part] has been getting a broader perspective of the school beyond athletics,” Coach Mukai said. And as for the vibe of the school? “It seems like a pretty positive growth mindset culture where it feels like [Westridge] really values a lot of the same things that I value,” she continued.

When asked about her vision for the Human Development program, she centered her explanation around topic additions. “I want to talk about the spectrum of coping mechanisms that all people use to just get through life. That includes drugs and alcohol—there hasn’t been a ton of drug and alcohol content in the curriculum.” Rather than “demonizing the behavior,” Coach Mukai’s approach frames drugs and alcohol within an approach of “harm reduction.” Coach Mukai also adds that she’d like to add nutrition awareness, a concept missing entirely from the curriculum in years past.

Halfway through our interview, I asked Coach Mukai if there was anything about her that would surprise Westridge students. She laughed and redirects the question to me, at which point I brought up the fact that she drives a truck. The truck in question, a 2001 Toyota Tacoma, was an important fixture of the last lacrosse season: post-game, the lucky player got to haul the ball bag to the truck. But when Coach Mukai happily announces to me that she bought a new truck, the interview takes a turn: “I feel like a bit of an impostor because I’m driving a new, nice truck. My old truck was kind of like a security blanket of ‘look at me, I’m authentic’—now, it’s like, ‘look at me, I drive a nice truck.’” Despite the new truck, authenticity isn’t something Coach Mukai lacks. In my experience as a player and now as a student, her candor, humor, and truck-owner energy make her an amazing addition to the Westridge community.