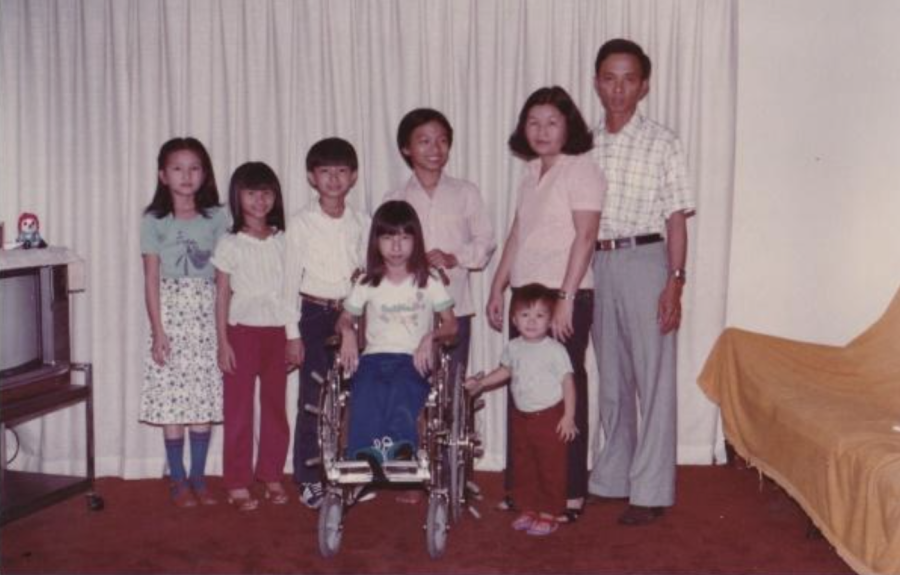 Dr. Ky with her family when they first immigrated (She is second from the left).

“America is the land of opportunity if you’re willing to work hard and you have a goal. Your life is what you make it here.”

Sean Ky Lord has the spirit of a fiery warrior wrapped up in the petite body of a teenager. Every single inch of her five-foot-one athletic frame is feisty! Born in Cambodia during a bitter civil war, she is alive today through a combination of luck, happenstance, and her unbending determination. Her very survival and immigration to America is a hero’s journey consisting of hair-raising plot twists, brushes with certain death, and triumph over Oliver Twist-like adversity. If there was ever a poster child who exemplifies the rags-to-riches immigrant story, it’s Dr. Sean Ky.

In early 1967, Cambodia erupted into a bloody civil war that lasted eight years and shocked the world with its atrocities. The Khmer Rouge Communist party perpetrated many acts of murder, torture, and mutilation on civilians. Dr. Ky recalls, “During Khmer Rouge, they would send your family to a different town just so it was unfamiliar to you. It was designed to break family units, break your mental strength and your physical strength so that you had no power against them.”

Child soldiers were used by the Khmer Rouge party to frequently commit war crimes. Dr. Ky’s siblings were separated from the family. “Once you turned seven, you were taken from your family and sent away to do forced labor. Girls had to cook, and boys were trained to be soldiers. My brothers were 11 and 12 and they had to be trained to be soldiers for the Khmer Rouge. I don’t even remember seeing them in Cambodia because they were just gone.”

Dr. Ky’s family was systematically starved and surrounded by the constant threat of violence and death. She said, “You couldn’t have food at home, so I had to walk to a cafeteria for all our meals. Nobody had food, nobody had money. They only gave us porridge and we never got any meat or protein. You only got enough to eat for you to survive. I wasn’t thriving or happy or playing. There was no such thing as playing.”

Like one million other Cambodians, the Ky family soon fled the country and decided to try to immigrate to Thailand. Her entire family escaped and reached Thailand by walking for days. As soon as they crossed the Thai border, they were placed in a Cambodian refugee camp. Ky recalled, “My dad actually speaks Thai, so when we were at the refugee camp, we were able to get out of the camp and go to the store or go to the market. A lot of the Cambodians got beaten by the Thai soldiers and had their belongings taken away from them.”

In a stroke of luck, the Ky family managed to gain sponsorship in America.

In 1979 Dr. Ky and her family first landed in Houston, Texas with no money, no place to live, and unable to speak English. They did whatever it took to survive.  “My parents sewed clothing. They basically worked in a sweatshop for 15, 20 years, which I participated and helped in. We made very little money doing that and you worked 15 hours a day. You just ate, slept, and worked. That was your whole life, every single day. When I grew up, I didn’t want to do the same thing. That motivated [me and my siblings] to do something better, to get an education, to get a professional degree where we could have a good job and provide a better life for our children.”

Dr. Ky graduated from USC Dental School and now owns her own dental practice. Out of her six siblings, five of them are either doctors or dentists.

Dr. Ky’s tumultuous journey to America instilled in her a strong work ethic and a will to survive. As I concluded my interview, she told me, “America is the land of opportunity if you’re willing to work hard and you have a goal. Your life is what you make it here.”